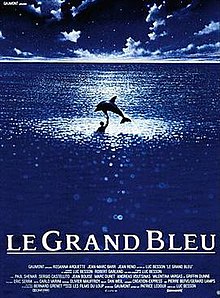 The Big Blue (French: Le Grand Bleu) is a 1988 English-language Cinéma du look film made by French director Luc Besson. The film stars Jean-Marc Barr, Rosanna Arquette, Jean Reno and depicts a fictionalized account of the sporting rivalry between two famed free divers. It is a cult-classic in the diving fraternity.

Luc Besson was initially unsure of whom to cast in the main role of Jacques Mayol. He initially offered the role to Christopher Lambert and Mickey Rourke and even considered himself for the role until someone suggested Jean-Marc Barr. Besson has a cameo appearance as one of the divers in the film. The Big Blue was the most financially successful French film of the 1980s, selling 9,193,873 tickets in France alone, and played in French theaters for a year.
The film charts the competition and friendship of real-life champions Jacques Mayol (played by Barr) and Enzo Maiorca (renamed in the film to "Enzo Molinari", and played by Reno). However the divers were not close in age in real life (four years apart) and did not compete. The action is divided into two timelines – the nascent rivalry between the two divers as children, and (as adults) their final competition at the world free-diving championships at the Sicilian town of Taormina. Mayol's search for love, family, "wholeness" and the meaning of life and death is a strong undercurrent of the latter timeline.

The movie begins with Jacques Mayol and Enzo Molinari as children in Greece (Santorini island) in the 1960s. They challenge each other to collect a coin on the sea floor and Jacques loses. Later Jacques' father goes diving in a reef, his breathing apparatus and rope gets caught in the rocks and Enzo and Jacques can do nothing but watch in horror as he is killed.

The movie continues in 1988 where Enzo (Jean Reno) rescues a diver from a shipwreck in Sicily. Later insurance broker Johana Baker (Rosanna Arquette) visits Peru for work purposes and meets Dr. Laurence (Paul Shenar). There she is introduced to Jacques (Jean-Marc Barr). She later returns to New York. Enzo then visits Jacques and asks him to enter the World Diving Championships in Taormina, Sicily. Learning about this, Johana convinces her boss to send her over there for work. She meets up with Jacques and the two fall in love.

On the first dive attempt at the World Diving Championships, Jacques beats Enzo the current World Champion. Enzo offers Jacques and Johana a gift, a glass dolphin as well as a tape measure displaying the difference between Jacques' and Enzo’s world records. Johana goes back home to New York and gets fired after her boss finds out she lied about issues with the insurance claim in Taormina. Johana then decides to leave New York to be with Jacques.

At the World Diving Championships Enzo beats Jacques' record. Other divers then attempt to break Enzo’s new record but all fail. Jacques then attempts his next dive and reaches 400ft (122m) breaking Enzo's world record. Angered by this, Enzo prepares to break Jacques' new world record. Dr. Laurence attempts to stop the dive stating that the pressure below 400ft is too great and will cut off oxygen in the body preventing the divers from reaching the surface again. Enzo attempts the dive anyway and is unable to make his way back to the surface. Jacques dives down to rescue him. Enzo tells Jacques that it is better down there, and urges Jacques to take him back down to 400ft. Jacques refuses as Enzo dies in his arms. Honoring his dying wish, Jacques takes Enzo's body back down to 400ft and drops him to the ocean floor. Jacques is then rescued from the water and taken back to the boat where the doctors revive him.

Jacques is then placed in medical quarters and appears to be recovering from the diving accident. During this period Johana learns that she is pregnant with Jacques' child. Jacques then experiences a strange dream where the ceiling collapses and the room fills with water and then finds himself in the ocean surrounded by dolphins. Johana returns to check up on Jacques in the middle of the night, finding him awake in bed with bloody ears and a bloody nose. Johana attempts to help him. In a trance-like state Jacques runs off to the diving boat and gets suited up for one final dive. Johana begs Jacques not to go, but he says he has to. Johana then tells Jacques that she is pregnant. The two embrace and Johana breaks down crying. Jacques then descends to 400ft and floats there for a brief moment staring into the darkness. A dolphin then appears and Jacques swims away with it into the darkness as the movie ends.

With its extensive underwater scenes and languid score (as with nearly all of Luc Besson's films the soundtrack was composed by Eric Serra), the film has been both praised as beautiful and serene, and in equal measure criticized as being too drawn out, overly reflective and introspective. While popular in Europe, the film was a commercial failure in North America due to the studio's[citation needed] recutting of the movie to include a simplified "happy" ending. In the American version, Serra's score was also replaced with a soundtrack composed by Bill Conti. This version was only available on VHS and Laserdisc in the United States (both with 4x3 pan and scan transfers) and is currently out of print. The director later released a longer Director's Cut on DVD, featuring the original ending and an extended version of the Éric Serra score.

The film was dedicated to his daughter Juliette Besson who required surgery, having become ill whilst he was working on the film. Most film parts were shot in the island Amorgos of Greece.

The Big Blue was nominated for several César Awards and won César Award for Best Music Written for a Film (Eric Serra) and Best Sound in 1989. The film also won France's National Academy of Cinema's Academy Award in 1989.

The film was screened out of competition at the 1988 Cannes Film Festival.[6]

Webnode, an innovative sitebuilder
Have a captivating website for free!
Get started