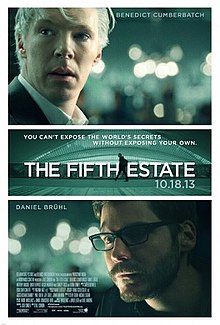 The Fifth Estate is a 2013 American thriller film directed by Bill Condon, about the news-leaking website WikiLeaks starring Benedict Cumberbatch as its editor-in-chief and founder Julian Assange, and Daniel Brühl as its former spokesperson Daniel Domscheit-Berg.[3] Anthony Mackie, David Thewlis, Alicia Vikander, Stanley Tucci, and Laura Linney are also featured in supporting roles.[4] The film's screenplay was written by Josh Singer based in-part on Domscheit-Berg's book Inside WikiLeaks: My Time with Julian Assange and the World's Most Dangerous Website (2011), as well as WikiLeaks: Inside Julian Assange's War on Secrecy (2011) by British journalists David Leigh and Luke Harding. The film draws its name from the construct used to describe the networked group of people that operate, in the manner of Julian Assange, outside the normal constraints society imposes.[5]

Co-produced by DreamWorks Pictures and Participant Media, The Fifth Estate premiered at the 2013 Toronto International Film Festival,[6][7] and was released theatrically in the United States on October 18, 2013 by Disney's Touchstone Pictures label,[8] with international distribution divided among Disney, Reliance Entertainment, and independent arrangements by Mister Smith Entertainment.[9][10]

Critical reviews were mixed; with the film receiving criticism over its screenplay and direction, whereas positive mentions were given on the acting, particularly Cumberbatch's performance.[11]

The story opens in 2010, with the release of the Afghan War Logs. It then flashes back to 2007, where journalist Daniel Domscheit-Berg meets computer hacker Julian Assange for the first time, at the Chaos Computer Club event in Berlin. Daniel's interest in online activism has led him to Assange, with whom he has corresponded by email. They begin working together on WikiLeaks, a website devoted to releasing information being withheld from the public while retaining anonymity for its sources. Their first major target isJulius Baer, whose Cayman Islands branch has been engaged in illegal activities. Despite Baer's filing of a lawsuit and obtaining an injunction, the judge dissolves the injunction, allowing Julian and Daniel to reclaim the domain name. As their confidence increases, the two push forward in publishing information over the next three years, including secrets on Scientology, revealing Sarah Palin's email account, and the membership list of the British National Party.

At first Daniel enjoys changing the world, viewing WikiLeaks as a noble enterprise and Assange as a mentor. However, the relationship between the two becomes strained over time. Daniel loses his job and problems arise in his relationship, particularly concerning the BNP membership leak, which also revealed the addresses of the people involved. Assange openly mocks Daniel's concerns about these issues, implying his own life has been more troubling, and his abrasive manner deepens the strain. Interspersed throughout the film are flashbacks hinting at Assange's troubled childhood and involvement in a suspicious cult, and that Assange's obsession with WikiLeaks has more to do with childhood trauma than wanting to improve the world. Daniel begins to fear that Assange may be closer to a con-man than a mentor. He also notices that Assange constantly gives different stories about why his hair is white. Assange at first tells Daniel that WikiLeaks has hundreds of workers, but Daniel later finds out that Daniel and Assange are the only members. Most importantly to Daniel, Assange frequently claims that protecting sources is the website's number one goal. However, Daniel begins to suspect that Assange only cares about protecting sources so people will come forward and that Assange does not actually care who gets hurt by the website, though Assange claims that the harm the website may cause is outweighed by good the leaks create. Daniel's girlfriend tells him that she believes in his cause, but that its his job to prevent Assange from going too far.

The tensions come to a head when Bradley Manning leaks hundreds of thousands of documents to WikiLeaks, including a video of an airstrike in Baghdad, the Afghan and Iraq War Logs, and 250,000 US Diplomatic Cables. Assange wants to immediately leak the documents, but Daniel insists that they review the documents first. Later, several major newspapers and WikiLeaks agree to work together to cooperate in releasing the documents while spinning WikiLeaks positively. However, a requirement of the newspapers and Daniel is that the names in the documents be redacted both to protect sources and to assist in the media spin, to which Assange reluctantly agrees. Daniel realizes that Assange has no intention of following through on this promise, and is grooming a right hand man to replace Daniel. The redacted documents are eventually released by the newspapers, resulting in media and public uproar, forcing American informants to flee from their countries of residence and many America diplomats to resign. Before Assange can go further, however, Daniel and the other members of the original WikiLeaks team delete the site and block Assange's access to the server.

Daniel later talks with a reporter from The New York Times, and the two fear that giving Assange such a large platform was a mistake. The reporter tells Daniel that while Assange may be untrustworthy, he had done a good thing, uncovering secret dealing in the government and business world and attempting to protect sources.

As the film ends, it is revealed WikiLeaks is continuing to leak information (with Assange implied to have either regained the site or rebuilt), and the Manning documents were released with no redactions. Daniel has written a book on his involvement with the organization on which this film was based, and that Assange has threatened to sue in retaliation. Julian himself is shown to be living in the Ecuadorian embassy in London, stemming from an outstanding warrant on sexual allegations. In an interview, he denounces the development of two upcoming WikiLeaks films, stating that they will be factually inaccurate (having been partly based on Daniel's book), and informs the viewer that individuals are what the government is afraid of. The real Assange claims that hiring Daniel was the one mistake he made.

It was reported in March 2011 that Steven Spielberg's DreamWorks Studios had acquired the rights of Domscheit-Berg's book Inside WikiLeaks: My Time with Julian Assange and the World's Most Dangerous Website, as well as WikiLeaks: Inside Julian Assange's War on Secrecy by British journalists David Leigh and Luke Harding.[12] Spielberg was quick to clarify that he is not involved in any way in the adaptation even though his DreamWorks company would produce the film. In July 2012, reports surfaced that Jeremy Renner was in talks of playing Julian Assange and Bill Condon was in negotiations to direct. It was also announced that Josh Singer penned the screenplay. Later that year, Deadline Hollywoodbroke the news that Renner was out of the running and the studio was seeking Benedict Cumberbatch instead.[13] Joel Kinnaman was also attached at some point but reports were proven to be premature. The confirmation of Cumberbatch as the lead and Condon as the director also brought the news that James McAvoy was in talks to play Daniel Domscheit-Berg.[14] McAvoy later dropped out because of scheduling conflicts and Daniel Brühl was eventually cast.

In December 2012, the film's title was reported as The Man Who Sold the World[15] but with the official press release, it was confirmed that the film's title was actually The Fifth Estate. Though unconfirmed by the studio, it is thought that the title of the film pertains to the alternative media which consists of online journalists and bloggers who present themselves as an alternative to the mainstream press.

The film's title sequence, which depicts the history of news communication, took over a year to create.[18]

On January 24, 2013, Assange claimed during a presentation of the Sam Adams Award for Integrity in Intelligence—held at Oxford University—that he had read the screenplay of the film, describing it as a[19] "serious propaganda attack on WikiLeaks and the integrity of its staff", as a "lie built upon a lie", and as "fanning the flames for war on Iran":[20] the opening scene was inside a putative military complex in Iran and nuclear symbols could be seen. Birgitta Jónsdóttir told the WikiLeaks official Twitter account that "the Iran scene has been written out, plus the name has been changed. Come with constructive ideas how to improve it".[21] Birgitta also tweeted that Assange does not possess the latest version of the script.[22]

“It may be decades before we understand the full impact of WikiLeaks and how it's revolutionized the spread of information. So this film won't claim any long view authority on its subject, or attempt any final judgment. We want to explore the complexities and challenges of transparency in the information age and, we hope, enliven and enrich the conversations WikiLeaks has already provoked.”

—Director Bill Condon, on the film[23]

Although Julian Assange has described the film as a "massive propaganda attack",[24] he did discuss the film with Benedict Cumberbatch, with Assange claiming that he's "personally supportive" of the organization.[25]Cumberbatch stated that, "No matter how you cut it, he's done us a massive service, to wake us up to the zombielike way we absorb our news."[26][27] Since Assange has been living inside the Ecuadorian embassy in London under diplomatic asylum, he and Cumberbatch reportedly communicated via email during filming.[28]

On September 21, 2013, a script, allegedly the film's screenplay, was released by WikiLeaks, along with commentary labeling the film as "fiction masquerading as fact".[29] Both Assange and WikiLeaks have stated that neither DreamWorks nor Disney approached them for any consultation on the film.[24][29][30] Assange elaborated on the matter, "I don't think we are in a situation anymore where an organization like DreamWorks or Disney can succinctly decide that it is going to produce a movie about living people, and living political refugees, and people who are embroiled in a grand jury proceeding in the United States, and just smear, without the cost."[31]

“Our view is that a $US40 million advertising budget promoting WikiLeaks around the world, and actors like Cumberbatch speaking about it, is a good thing for the popularisation of WikiLeaks”

In October 2013, WikiLeaks published a personal letter that Assange wrote to Cumberbatch in January of that year, in which he commended the actor's talent and good intentions, but requested him to reconsider his involvement with the film, which Assange negatively labeled as "a project that vilifies and marginalises a living political refugee to the benefit of an entrenched, corrupt and dangerous state."[35] WikiLeaks described Cumberbatch's reply to Assange as "courteous and considered".[35] Cumberbatch also admitted his reservations with the early drafts of the film's script, believing that it portrayed Assange as an antagonistic person.[36] In regards to his continued involvement with the film, Cumberbatch stated; "I wanted to create a three dimensional portrait of a man far more maligned in the tabloid press than he is in our film to remind people that he is not just the weird, white haired Australian dude wanted in Sweden, hiding in an embassy behind Harrods. But a true force to be reckoned with, achieved the realization of the great ideal."[37] In an interview with George Stephanopoulos' show This Week, Julian Assange stated that "Cumberbatch tried to ameliorate the script but unfortunately with limited success... though I'm pleased he tried."[38]